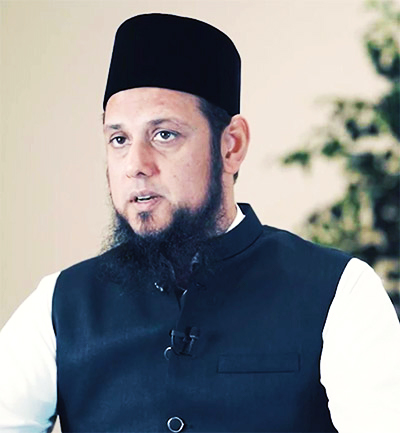 Mufti Aasim Rashid is a Muslim scholar, educator, public speaker, author, and community leader.  He grew up in Edmonton, Alberta, Canada, and embarked on a lengthy journey to seek Islamic knowledge. He has since devoted his life to imparting knowledge, wisdom, and motivation to the masses.  He has delivered lectures around the world and served numerous communities, making substantial contributions wherever he has served.

Upon graduation, Mufti Aasim Rashid was appointed as a teacher at Jaamiah Ajax, where he taught various levels of the Dars Niẓāmī syllabus including major books of fiqh, tafsīr and hadith.

He later shifted to Montreal as the imam of a major Islamic center, while continuing to teach hadith at Jaamia Ajax as a visiting professor.  It was during this time that he laid the foundation for his own institution, now known as the Al Ihsan Educational Foundation.  This Foundation operates a dār al-ʿulūm seminary program, as well as educational programs for all levels of learning.

Mufti Aasim held the position of Director of Religion and Islamic Education for the B.C. Muslim Association, a large Islamic organization operating a wide network of mosques and schools in Canada, from 2010 to 2015.

He then commenced work on create a new model for religious education in Islamic schools, a project that took him to Australia in 2018, where he completed, tested, and refined a new educational system for Islamic schools in the West.  This new system, “Ihsan Quest,” significantly raises the standards and learning outcomes for what is known as ‘Islamic Education” today. It empowers students to understand modern applications of the teachings and solutions to contemporary issues.

Aside from this, he has designed and delivered a vast range of specialized courses and programs, full-time and part-time, many of which are available through Al Ihsan.

In 2016, Mufti Aasim launched a new initiative called Islam Unravelled under the umbrella of the Al Ihsan Educational Foundation. This is an outreach educational program for government-based and private organizations to help them better understand Islam and Muslims so they can have more effective and meaningful engagement with Muslim clients, colleagues, or partners.  Islam Unravelled also conducts programs for the masses, has a strong anti-Islamophobia and anti-racism portfolio of programs. Click here for more information.

He continues to teach a wide range of subjects, with special focus on hadith compilations such as Ṣaḥīḥ al-Bukhārī, Jāmiʿ al-Tirmidhī, Sunan Abī Dāwūd, and Mishkāt al-Maṣābīḥ; as well as takhaṣṣuṣ fī’l fiqh to students at advanced levels of knowledge.

He conducts weekly lectures on hadith and tafsīr, as well as workshops and seminars on crucial contemporary issues.  He is a well-known speaker at Islamic events and academic institutions, and spiritual mentor for many people.

Mufti Aasim has compiled several works in Arabic, English and Urdu. Many of them are currently used as textbooks at schools and learning institutions around the world.